Beginning in 1992, the County of Hawai‘i, State of Hawai‘i and the Federal Highway Administration (FHWA) collaborated on realizing Senator Daniel K. Inouye’s dream to link the east and west sides of the Big Island with a modern state highway. The Saddle Road as we know it today began life as a crude track bulldozed during World War II through recent lava flows from Mauna Loa, following 19th century trails. After the war was over, Territorial and U.S. Army leaders questioned whether to abandon it, but it was maintained in a very basic state for five decades because of its utility to the growing base at Pōhakuloa Training Area (PTA) and Mauna Kea astronomy.

The twisty, bumpy, narrow, and uneven road was littered with potholes and surrounded by hazardous lava boulders. Rental car contracts expressly forbade traveling over the Saddle, because it beat up their vehicles, and stranded motorists were hard to extract in the days before cell phones. Nevertheless, as inter-regional traffic grew in tandem with tourism, motorists who needed to get quickly between Kona/Waikoloa and Hilo drove it more and more every year.

The County of Hawai‘i conducted repaving and shoulder work to smooth out the ride. The improvements were welcome but tended to encourage speeding on the still incredibly curvy road. The hazardous conditions on Saddle Road eventually earned it the title of the most dangerous road in Hawai‘i per vehicle mile traveled. Pressure grew for solutions.

While most everyone recognized what a boon a modern highway would be, many felt that building a new facility over the 60 miles between Hilo and Waikoloa was just a pipe dream. Environmental sensitivity, logistical difficulty, the presence of PTA, and the high costs were large hurdles to overcome. Fortunately, in the mid-1990s, Senator Inouye took the reins and expressed his vision to link the two sides of the island. He appointed various island leaders to the Saddle Road Task Force, chaired for many years by Walter Kunitake of Kona, to be his eyes and ears and assist in advocating for the highway. He leveraged his position as a senior Democratic Senator and found various sources of funding, including Defense Access Road funds for the section in and around PTA. He understood the sensitivity and committed to a design with a light touch on the land and an innovative and well-funded mitigation package.

The ideal termini for the highway were State Highway 11 at Puainako Street in Hilo and somewhere on Queen Ka‘ahumanu Highway in Kona or Kohala. However, various projects that took on portions of this grand route also had independent utility and could reasonably be planned and constructed separately. The County of Hawai‘i was first out of the gate with the federal-aid Puainako Extension from Komohana Street to Kaumana Drive in Hilo. Mayor Stephen Yamashiro was a critical factor in its success. The proposal would not only bypass twisty Kaumana Drive, where growing traffic was leading to unsafe conditions, but also establish a fundamental first link in the new Saddle Road. This section began planning in 1992.

The Puainako Extension was Geometrician Associates’ first major EIS project, conducted with Okahara & Associates. Our teams of environmental scientists, archaeologists and biologists pored over topographical maps, airphotos and zoning maps, and also consulted old-timers. The goal was to devise alternative routes that would minimize costs and environmental damage while maximizing utility. Starting with several potential routes of about 5 miles each, we walked every inch, reporting back to engineering teams, highway agencies, County officials and the public in a long series of small group and public meetings. The final selected route avoided all archaeological sites except for a few sugar plantation remnants, did not impact endangered species, and minimized impacts to wetlands. Some innovative mitigation included funding Ka‘ū silversword bog habitat restoration a dozen miles away in the upper Waiakea watershed. The Puainako Extension was completed in 2000 and has been one of Hilo’s vital arteries ever since. Incidentally, the State’s portion of the project was to improve the segment makai, from Komohana Street to Kilauea Avenue, by expanding some existing roadway sections and bypassing others. Unfortunately, despite fits and starts, the State has never advanced the project beyond design.

During the Puainako Extension’s EIS process, the FHWA began to play a major role in guiding the Saddle Road project. In 1995 the agency assembled a team of engineers (including Okahara & Associates) and scientists from Hawai‘i and the mainland (including Dr. Grant Gerrish) and began planning the Saddle Road from the terminus of Puainako Street to Mamalahoa Highway at the Kona/Kohala moku border. Geometrician Associates joined the project with the limited role of socioeconomic studies, but by the time of Final EIS preparation, we had assumed much of the responsibility for document quality control, as well as public involvement, which was led by William L. Moore Planning. Initial studies whittled down the alternatives to 12 combinations of multiple routes in four different sections. While this provided many choices, it necessitated a massive effort in field studies. All action alternatives involved reconstructing the roadway to a two-lane highway with climbing lanes where appropriate, paved shoulders, and a design speed of 60 MPH. All were planned to improve pavement conditions, increase safety and capacity, improve quality of traffic flow, decrease cross-island travel times, improve emergency response, and stimulate economic growth and appropriate development.

Major issues associated with the project were the loss of 200 acres of critical dryland habitat for the endangered palila bird, which was also hunting land; impacts to rare rainforest species and habitat; montane wetlands; increased access to Mauna Kea at a time when opposition to astronomical observatories on the summit was increasing and public visitation was degrading summit habitats; the perception that the project was basically designed to increase military use of PTA; and concerns related to wildfire and invasive species. Because of the habitat sensitivity, our teams of biologists included not only the usual botanists and ornithologists but also malacologists and other invertebrate specialists. Two separate cultural impact studies were conducted that examined not only the alternative highway corridors themselves but also areas that would be more accessible with the improvements. More than 100 meetings were conducted in Hilo, Waimea, Waikoloa and Kona to provide facts about the project and take input, some of which was used to alter design and formulate mitigation. Dozens of agencies provided review and critique of the design, impact analysis and mitigation. The most significant mitigation was associated with the Palila Memorandum of Understanding, with commitments valued at an estimated $15 million to protect and restore almost 10,000 acres of offsite degraded habitat.

The Final EIS was completed in 1999. Final highway design proceeded and the necessary construction and land use permits were obtained to begin construction. The first segment built was a completely new alignment of a 6.5-mile portion of Saddle Road from Milepost (MP) 28 to 35 within PTA, which was opened to traffic in May 2007. Reconstruction between MP 19 and 28 was completed in October 2008.  The section north of the PTA cantonment area from MP 35 to 41 was completed and opened in August 2009, and the section between MP 11 and 19 was completed next in 2011. Four different Conservation District Use Permits were required to advance each of these sections. Geometrician Associates wrote and processed each permit on behalf of the Hawai‘i Department of Transportation. The remainder of the eastern side of project from MP 6 to MP 11 was not completed until 2017. 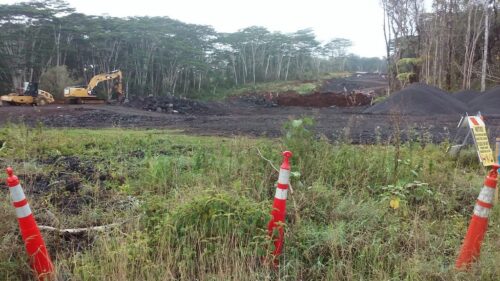 One of the most important sections of the project was the western end from MP 41 to MP 52. Without this shortcut through Parker Ranch’s vast Ke‘āmuku parcel, motorists had to spend an additional 15 to 20 minutes on a trip to Kona. Although it was a priority to construct, the Army purchased the Ke‘āmuku parcel for military training in 2006 and objected to the alignment that FHWA had selected. In order to provide a safe separation of civilian transportation and military training, the Army requested that FHWA and HDOT find another route near the southern boundary of Ke‘āmuku.  An entirely new Supplemental Environmental Impact Statement (SEIS) was necessary to find and investigate a new route along this 11-mile shortcut.

Geometrician Associates was the Chief Author and Principal Investigating Scientist for the SEIS, which was completed in 2010. In tandem with the engineer, our firm and its associates put together a new route from just east of the seven steps of the old Saddle Road down to Mamalahoa Highway, weaving between endangered species patches, sensitive drainages, archaeological sites, military training areas, and lands with hunter concerns. Every bend in the road has a story to tell about this route selection process. Construction started in 2012, and the western section opened up on September 7, 2013, to the great relief of the traveling public. Senator Inouye died suddenly in 2012 and was not able witness it, but the highway that resulted largely from his vision and perseverance was christened the Daniel K. Inouye Highway on that day.

The Daniel K. Inouye Highway (let’s admit it, everyone still calls it Saddle Road) has turned out to be one of the most scenic of all State highways on the island. The scenery was always great, but prior to the improvements, the white-knuckle intensity required to negotiate its curves, potholes and speeding drivers crossing the centerline tended to distract drivers from the beauty around them. The key to retaining the scenery when you modernize a road and add a lot of safety features is certainly restraint. Despite the need for wide shoulders for bicyclists and stalled vehicles and even wider boulder-free recovery zones outside the shoulder, the highway retains a minimalist feel. Native forests in varying ecosystems along with rolling pastures provide a foreground, with majestic shield volcanoes and their cinder cones in the background. The drive has become something of a tourist attraction in itself, something a visitor should not miss.

The final chapter of the cross-island highway will conclude with construction of a highway between Mamalahoa Highway and Queen Ka‘ahumanu Highway, completing the vision. This route, called the Saddle Road Extension, would hug the Kona/Kohala boundary and bypass the Waikoloa community. Motorists could drive coast to coast on a safe and modern highway in just over one hour. Environmental studies and engineering are in an advanced state. Geometrician Associates acted as the Chief Author and Principal Investigating Scientist for the Draft EIS, which was issued in 2017. Once again, the land required a very close examination to avoid important resources and minimize impacts. After completion of the fieldwork in this phase, I came to realize that over the previous 20 years I had managed to walk the entire distance between Hilo and the Waikoloa Beach Resort – on at least three different routes!

As for the Saddle Road Extension, unfortunately, funding dried up in 2017 and the project has been on an extended pause. But I am sure that one day, the Daniel K. Inouye Highway will be complete.

Featured Projects
Geometrician Associates
If you have a project you would like to discuss please contact me. Mahalo.
Get In Touch
Back To Top